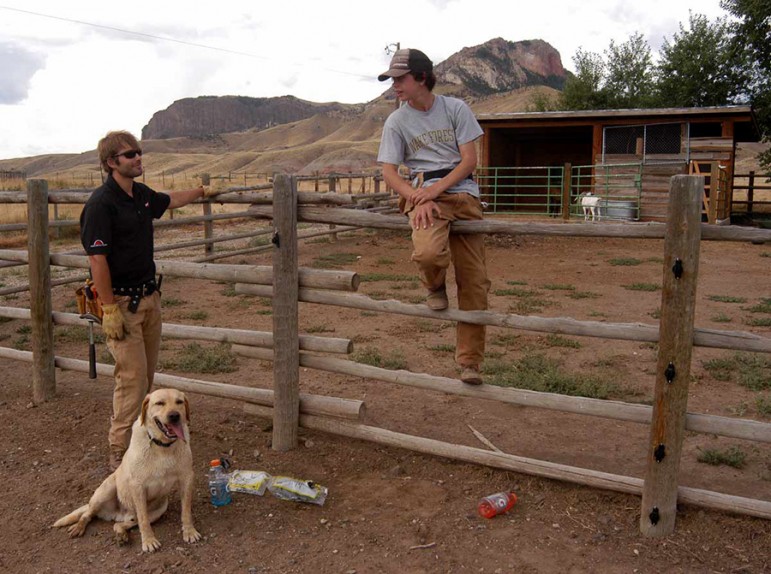 P.J. Schneider, right, and dog Dexter take a break while installing an electric fence last month with Russ Talmo. Defenders of wildlife helped Schneider with cost-sharing and technical expertise on the project at a ranch southwest of Cody, Wyo. where chickens and goats could attract grizzly bears.

CODY, WYO. — As the long, hot days of summer give way to cooler fall weather, bears across the greater Yellowstone area begin to binge on every available food source in preparation for winter hibernation.

That typically brings increased conflicts with people, as bears become single-minded in their pursuit of calories, pushing into more populated areas and spending more of their time searching for a meal.

Which is one reason why P.J. Schneider, 15, was busy last month installing an electric fence around a pen and small shed where he keeps 14 chickens and three goats.

Schneider lives on a rural ranch property east of Yellowstone National Park and 15 miles southwest of Cody. It’s an area frequented by grizzly bears, especially in spring and fall.

Though he hasn’t had any trouble with bears yet, Schneider said he wanted to get his fence finished before there was a conflict.

“That’s the time to take care of this, before there’s any problem,” said Russ Talmo, a field technician with Defenders of Wildlife who installs dozens of electric fences each year in bear habitat around Yellowstone.

Talmo was helping Schneider set up new a fence as part of a program sponsored by Defenders of Wildlife that provides funding, on-site assistance and consulting expertise for anyone looking to install electric fencing aimed at keeping bears away from attractants.

“It just seems like everybody’s got them now, and between the chickens and their feed, they have a really high potential to be a source of conflict,” he said.

Talmo installs as many as 50 electric fences each year as part of the Defenders of Wildlife program, and about 80 percent of those are for chicken coops. He consults and advises on dozens of other do-it-yourself fences.

Defenders of Wildlife will reimburse landowners for up to 50 percent of the cost of the fence, which typically runs about $250, he said.

For Schneider, an independent and handy ranch kid whose father died unexpectedly a few years ago, Talmo’s expertise was just as important as the cost savings.

“I knew how to do most of the fence, but I would never know how to do the solar panels or run it through the gate,” Schneider said. “He saved me a lot of time showing me the best way to build it.”

A bear-proof electric fence is a weekend project most people can handle with a little guidance, said Cathy Roes of Midwest Fence, which supplied materials for Schneider’s project.

Roes said her company offers free instructional materials that make the job easier, something Defenders also does for those seeking specifics on fencing out bears.

Though the electric jolt delivered by a bear fence is greater than is typical for fencing in cattle or horses, it’s not fatal for Schneider’s goats, which he keeps for milk and to help with weeds.

For more information on the Defenders of Wildlife fence program, call 406-728-8800 or email rtalmo@defenders.org.

Talmo said the fence also keeps out coyotes, wolves and other predators that might be drawn to the chickens. Schneider sells eggs to neighbors and is interested in ranching, having helped raise bison on the same property with his late father.

While no fence is 100 percent bear-proof, a properly installed and maintained electric fence is a simple, effective way to keep even the largest grizzly away from chickens, Talmo said. The program also covers fencing around gardens, fruit trees or virtually any potential bear attractant.